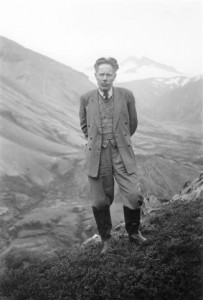 Þórbergur Þórðarson, one of Iceland’s most significant twentieth-century authors, was born and grew up at Hali farm, in the district of Suðursveit. At that time, this community was geographically isolated, cut off on both sides by rushing, sand-filled glacial rivers. Above it, there were massive mountain ranges topped by stretches of glacial ice; below it, a harbourless expanse of wave-beaten sands.

In the closed-off world of Suðursveit, life was characterised by a struggle with the powers of nature. Without a doubt, this fight stimulated the inhabitants’ mental capacity, demanding that they be highly practical, precise, skilled in crafts, and perceptive. The sole signs of any other world were the French sailing vessels which approached the shores in spring; these lured the young boy Þórbergur to seek adventure.

At the age of 18, Þórbergur left home. Though short of means, he took with him the great intellectual heritage received from his ancestors. The living room, or baðstofa, at Hali had provided him with a literary upbringing in which members of the household had read out the Icelandic sagas and other literature late in the evenings. Storytelling was a rich tradition, and Þórbergur had memorised numerous poems and verses. The most entertaining moments in his life had been when Oddný, an old woman living at the neighbouring farm of Gerði, came for visits and told stories of the past.

Key years in the life of Þórbergur

While only major works by Þórbergur are listed above (with free translations of the titles), he also wrote a number of essays and other pieces on a variety of subjects, besides writing in the international language Esperanto. Part of Íslenskur aðall has been translated into English (In Search of My Beloved), German (Unterwegs zu meiner Geliebten) and Danish (Undervejs til min elskede). Further Þórbergur translations are in progress.

Upon the publication of Bréf til Láru in 1924, Þórbergur Þórðarson became famous overnight.  This book may be said to have changed the course of early twentieth-century Icelandic literature. Bréf til Láru offers sharp criticism not only of his contemporaries’ worship of money but also of the Church and a wide range of social injustice. Þórbergur emerges as a writer of unbridled, sometimes daring imagination, possessed of a vast vocabulary and consummate style, together with a finely honed wit. However, the book also led to his dismissal from teaching.

Two autobiographical novels, Íslenskur aðall and Ofvitinn, deal with Þórbergur’s life from 1909 to 1914. In addition, they provide significant contemporary sources on life in Reykjavík at that time. However, both novels often doctored the truth in order to serve the structure and ends of enjoyable narrative, and Þórbergur nowhere held back when making fun of himself, even though he was describing his own period of poverty and destitution.

Þórbergur is considered one of the greatest Icelandic stylists of his day, with an unrivalled vocabulary and astonishing facility for written expression.
Therefore, he was respectfully dubbed “Master Þórbergur”.

Although internationally minded, Þórbergur Þórðarson recognised even during his youth the immense resources inherent in the distinct characteristics of Icelandic culture and nature. He thus focussed on preserving and recording the history and way of life of ordinary Icelanders, so that knowledge of them would never be lost.

The biography Ævisaga Árna prófasts Þórarinssonar and the books included in Í Suðursveit are unique in Icelandic literary history. Reading them resembles a journey into the past, evoking realistic pictures of a vanished world in which actual people speak to the reader. Everyday events become exciting adventures; place names, folktales and oral heritage create a grand framework; and magnificent social descriptions keep the bygone characters of Þórbergur’s time alive, even for today’s Icelanders.
This is the foremost achievement of Þórbergur’s writings: their ability to bring knowledge to life.

Sálmurinn um blómið allows the persona of an aged Þórbergur Þórðarson to enter once more into the world of childhood, and also gradually reveals the true world to a young girl, Lilla Hegga. There are powerful messages about equality, peace, living a wholesome life, and preserving cultural values. Folk beliefs are discussed, as well as the games and challenges of childhood, the joys and sorrows in everyone’s life, and Suðursveit, the community where Þórbergur grew up.
Thus, this book reaches out to the young at heart, regardless of age.